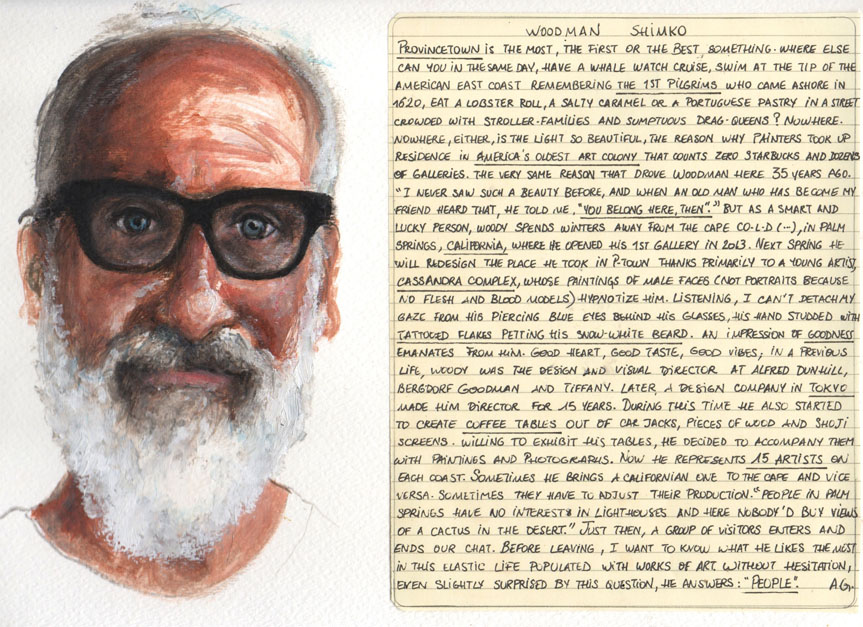 Provincetown is the most, the first or the best something. Where else can you in the same day, have a whale watch cruise, swim at the tip of the American East coast remembering the first Pilgrims who came ashore in 1620, eat a lobster roll, a salty caramel or a Portuguese pastry in a street crowded with stroller-families and sumptuous drag-queens ? Nowhere. Nowhere, either, is the light so beautiful, the reason why painters took up residence in America’s oldest art colony that counts zero Starbucks and dozens of galleries. The very same reason that drove Woodman Shimko here 35 years ago. “I never saw such a beauty before, and when an old man who has become my friend heard that, he told me ’you belong here then’.”  But as a smart and lucky person, Woody spends winters away from the Cape cold (ha ha), in Palm Springs, California, where he opened his first gallery in January of 2013. Next spring he will redesign the place he took in Ptown thanks primarily to a young artist named Cassandra Complex whose paintings of male faces (not portraits because no flesh and blood models) hypnotize him. Listening, I can’t detach my gaze from his piercing blue eyes behind his glasses, his hand studded with tattooed flakes petting his snow-white beard. An impression of goodness emanates from him. Good heart, good taste, good vibes. In a previous life, Woody was the design and visual director at Alfred Dunhill, Bergdorf Goodman and Tiffany. Later, a design company in Tokyo made him director for 15 years. During this time he also started to design and create coffee tables out of car jacks, pieces of wood and Shoji screens. Willing to exhibit his tables, he decided to accompany them with paintings and photographs. Now he represents 15 artists on each coast. Sometimes he brings a Californian one to the Cape and vice versa. Sometimes they have to adjust their production. “People in Palm springs have no interest in lighthouses and here they won’t buy views of a cactus in the desert.” Just then, a group of visitors enters and ends our chat. Before leaving, I want to know what he likes the most in this elastic life populated with works of art. Without hesitation, and even slightly surprised by this question, Shimko answers : “People.” A.G.